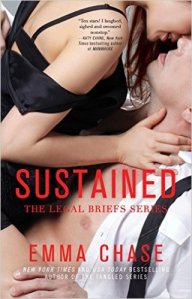 I was so pleased when I was able to get my hands on an e-galley of Emma Chase’s Sustained. One of the bloggers I trust and admire, (Mandi at Smexy Books, here is her review of Sustained) tweeted about it and I was instantly hooked. I love stories featuring kids (yes, it’s a bit odd because I have no desire for real life kids but in books, they are a favorite trope) and well, it just sounded intriguing. And it was!

Jake Becker is a defense attorney. He deals with some of the scummiest people around (people who embezzle, steal from others, etc) but he loves his job and he wants to make partner. Jake is well, a bit of a lothario. He doesn’t do relationships and one night stands are kind of his calling card. That changes when a young lad steals his wallet. When Jake brings the young boy, Rory, home, he meets his guardian, Chelsea. Jake is struck dumb with insta-lust. Unfortunately, Chelsea has a lot on her plate. Her brother and sister-in-law recently passed away in a car crash and now she is the sole guardian for her nieces and nephews. All six of them. Dropping off young Rory is the last interaction Jake expects to have with the family but it’s far from over. Chelsea calls on Jake when Rory does something even worse and thus begins Jake’s growing infatuation and emotional connection to Chelsea and the kids.

Firstly, this book is set in first person point of view, solely from Jake’s POV. I guess I didn’t expect that when I opened the book but I quickly got into the rhythm of Jake and his thoughts and feelings and well, it worked for me. I know some people are sensitive to first person POV, so I wanted to mention this.

As everything is told from Jake’s perspective, readers get to know him best. And the kids too honestly. Chelsea remains a bit distant but I still enjoyed her character and getting to know her. While it has been very tough since her brother died, and she is doing her best to put on a brave front, you have to give her credit for doing the best she can for her nieces and nephews. And Jake really admires that in Chelsea. He knows she is a forever kind of girl and not the type of woman he usually has in his life but he can’t seem to stay away.

Jake is a bit of a smartass which I loved. He could easily match wits with Rory because he understands what the young boy is going through. And he makes a great caregiver and protector. His character really does go through a positive change but without changing who he really is. He is still a smartass and he is still great at his job but he’s grown and I feel like the author reshaped him without making him into a shell of himself. It was a great transformation.

I loved the scenes with Jake and the kids too. He made me laugh a lot with his consternation with the kids but he bonds with them quickly too. He also smooths things over for Chelsea and her relationship with the kids. There was some resentment, natural given the circumstances the kids are facing, but it made for a rough beginning.

I haven’t read the first book in the Legal Briefs series so I can’t compare the two stories, but I know characters from the first book play a role in this story. Fortunately they don’t steal the show!

Sustained had me laughing and it’s one of the few romances that I couldn’t tear myself away from this year. It’s just a great contemporary love story. I am very excited for the third book in the series. This is the first book I’ve read by Emma Chase but I am hoping that her previous stories are just as good. I need to explore her backlist clearly.

Sustained is going on my favorite romances of 2015 list! It is available now at all major retailers.

ARC provided by publisher via Edelweiss.

Other reviews of Sustained:

I’m excited today to talk about a new book series from author Samantha Kane. I’ve actually been reading Samantha Kane for many years now, since way back when I was in college in fact (here’s one of my reviews for her book, A Lady In Waiting, which came out in 2008! I’ve gone by the moniker “Sarah W” in my reviews for years now.) Thus, when I heard about her new book, Broken Play, I was really excited to read it. 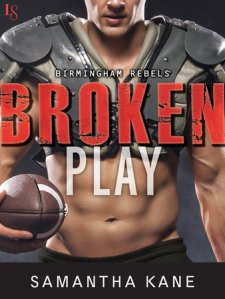 Broken Play is a sports book, yay! That is what caught my eye right away. And it also happens to feature a m/m/f storyline which I hadn’t read in awhile so again, this caught my eye and I thought I would give it a try.

Marian is the new assistant offensive coach for the Birmingham Rebels which are not exactly the most winningest team in the NFL. They are bit of the losers of the league from what I gathered while reading. BUT the players want to change that, as does Marian. From the instant Cass lays eyes on Marian, he is ready to be with her. And he wants his best friend, Beau, to join in. Cass sees a deeper connection between the three of them almost instantly. I will admit, that was a bit hard for me to buy into, especially given Cass and Beau’s prolific past. Marian knows about this past and she is determined to not be a part of any relationship with them. After all, it would be a disaster and unprofessional. Cass doesn’t think so and with the help of Beau who grows to admire Marian, they set out to woo her. And it is SEXY.

The biggest drawback I had with this book was that it took me awhile to get into the head of Cass, in particular. I just didn’t see WHY he wanted Marian so much aside from her looks. It came off rather shallow initially but I forged ahead and I am glad I did. The author lays out deeper motivations for her characters as the story continues and I was able to see what drew Cass to Marian. My favorite character in the story was Beau. He was just the silent, brooding type that I love reading about. His love for Cass, and then Marian, really shines through on the pages. He is Cass’s right hand man (in EVERY sense of the word) and truly believes that without him, his future would have been much different. I won’t give the details away but Beau has quite the sad backstory and Cass’s help through that time really made me admire them both.

This book can be a bit slow at points. The football backdrop didn’t come off quite as effortlessly as other sports romances I have read recently. It was there but I would have liked to see all three characters in their careers a bit more, especially Marian given her role in such a male dominated field. Overall though, I read through this book quite quickly and enjoyed it. And the ending, which is HOT HOT HOT, well I’m definitely ready for book two already. I think the Birmingham Rebels are going to hook in a lot of readers! The closest readalike I can compare this to is Jaci Burton’s Play-by-Play series, though of course, those books are strictly m/f. But I have a feeling if you enjoy that series, Samantha Kane’s new series may be a great title to check out.

Marian Treadwell knows all about the video. And now that she’s the Rebels’ new assistant offensive coach, she can’t look at Beau and Cass without picturing their hard, naked bodies—with her pressed in between. Marian would like nothing more than to indulge those impulses, but she knows better than to get too close to her players, a bunch of adrenaline-fueled alpha males who don’t always follow the rules.

Just the thought of sharing the gorgeous yet guarded Marian drives Cass wild. At first, Beau isn’t sure she’s right for them . . . and lately, all he desires is a little alone time with Cass to explore their new intimacy. But it’s only a matter of time before Cass breaks through both of their defenses. Because when seduction is the game plan, he always plays to win. 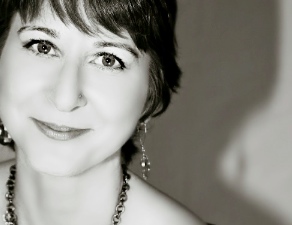 Samantha Kane lives in North Carolina with her husband and three children, two boys and one girl. With a master’s degree in American history, she spent seven years as a high school history teacher before becoming a full-time writer and mom.
Website | Facebook | Twitter | GoodReads