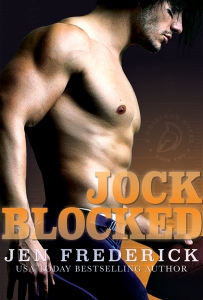 I really liked Sacked by Jen Frederick, the first in her Gridiron series. It was very romantic but it had a touch of unreality for me, what with the virgin hero who was a big campus football star. Jockblocked on the other hand worked for me in a major way, a much better way in fact. I thoroughly enjoyed this book even more than Sacked. I was utterly surprised how much I liked it given I didn’t have a huge amount of interest in Matty in the first book. I was so glad to be surprised by Matty and Lucy’s romance though. Well done, Ms. Frederick!

Matty is rather immature. He has the world (well, the college world) at his fingertips and he loves it. He can have anything he want, any woman he wants, and get away with no real responsibilities in his life except for his devotion to football. That all changes dramatically when Matty is asked (or forced may be the better word) by his football coach to convince their current quarterback to switch positions. This is the same quarterback who just helped the Warriors win a national title. It puts Matty in a very awkward position. He is tight with the defensive part of the team, not so much with the offense. To top it all off, Matty’s charm with the women seems to be wearing off. He can’t convince Lucy, a local barista, to go out with him no matter how much charm he puts out.

Lucy lives a safe, safe life. She does not welcome unnecessary risk at all. So interacting with Matty is hard because every fiber of her being is urging her to jump his bones. Her childhood friend, Ace, tells her to stay away from Matty because he is bad news. But still, Lucy cannot get him out of her mind. They have an unexpected connection and Matty is going to pursue it for all he is worth.

Matty and Lucy just stole my heart. If you enjoy “opposites attract” romances, Jockblocked definitely has a touch of that, though Matty and Lucy are definitely not as different from each other as they claim to be. Matt sees this very quickly and tries his best to woo Lucy. And when I mean his best, well, he does a darn good job.

Jen Frederick does a great job of showcasing Lucy and Matt as individuals. Matt has a life that revolves around football. Lucy ‘s college experience is heavily invested in her mock trial group. She is determined to see her team win big this year but she is working with a teammate who is complicated and rude at best, and at worst, just plain hard to work with (though I do admit I hope this character gets her own book!). Adding a relationship to the mix for either of them is not easy and Matt has the pain from a previous relationship to remind him just why it’s much easier to hook-up with girls than lead them on thinking he can offer more. But now he feels like maybe he has it within himself to give a relationship with Lucy a shot, even if she does happen to like coffee.

I am really excited to see where the Gridiron series goes after Jockblocked. This story had me enthralled from the very beginning. Matt just has a presence that leaps off the page, in a way that didn’t strike me in the first book I admit. And Lucy, well I just liked her and could easily believe in her reservations about getting involved with a football player. She has a lot riding on her college experience as well.

Also, as someone who is NOT passionate about football in anyway, I was actually kind of taken in by all the football talk and excitement surrounding the Warriors team. It felt like it was put into terms for any reader, sports or non-sports fan, which I can appreciate it.

Jockblocked is available now and is a book I highly recommend!