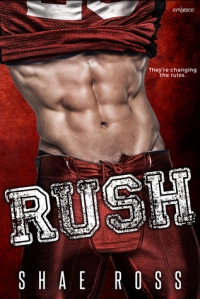 I’ve been looking for something a little bit different in my sports romances because at this point, I’ve read A LOT and well, they’ve started to blur together a bit, no matter how much I enjoyed them. I was very pleasantly surprised by Shae Ross’s Rush.

For starters, there are two very successful athletes in this book. Athletes that take great pride in their sports. Preston Rush is basically a God on campus. He is the star quarterback and he is being courted by the NFL. And yeah, he’s a bit of a love ’em and leave ’em ladies man.

Priscilla Winslow is a soccer star. She is talented and strong and athletic and boisterous and everything I like to read about in my female characters. She doesn’t give a lot of fucks about men and is in a bit of a dry spell but no biggie, she has great friends (who feature heavily in the story, yay!) and she is smart and talented. This girl HAS IT. She is a character I admired from the get-go.

When Preston leaves Priscilla in trouble with her soccer career, she is incensed. She tried to help him by rescuing him from a drunken fight where he was getting the crap beat out of him but this led to them both being jailed. And well, of course Rush gets off. He’s a football God, remember? Unfortunately, such is not the case for Priscilla. When she needs Rush’s help at the beginning of the book, after their jail time debacle, he lets her down in a big way. And even though I know this helped to further the story, I was equally angry at him.

All is not lost though, readers. These two do get their acts together and it makes for some memorable reading. Both romantic (yay sexy times) but also solid character growth for both Rush and Priscilla. Neither of these characters are quite what they seemed. I will say, I think the author painted Rush a tad too… do-gooder at times. He’s not from the most solid background (which is a refreshing change) but I almost feel like the author overcompensated with good deeds in how Rush helps his teammates. I don’t want a selfish hero but it’s possible to characterize someone as a tad too good. Fortunately, this is a minor qualm and really I’m going to be one of the few who think this I am sure. Overall, I was very pleased with how Rush and Priscilla shared and changed TOGETHER.

I also really liked the team camaraderie that Priscilla had with her teammates. They had each other’s backs, even off the field as Priscilla faced the awful realization that she was suspended. I think Shae Ross did a good job of showcasing the differences in consequences for men’s sports versus women’s sports, without becoming didactic about it. The reader is left to form their own opinion but I think you’ll see which way Priscilla falls on this issue.

I admit, I picked this book totally because of the cover. It is HOT. The story lives up to the cover though and this proves to be a really great package. It was just the change-up in a sports romance I needed and it made me realize I really need to read more female athlete stories.

Rush is well worth your precious reading time! You can add it to your Goodreads shelves if you’re so inclined.

Three Girls and a Book Obsession