I’m thrilled to be participating in this teaser blitz for Elizabeth Hoyt’s upcoming historical book, Duke of Desire. I’ve had the chance to read it already and well, if you’ve enjoyed any of Elizabeth Hoyt’s many books, this one is sure to please. Read on for a little excerpt and all the pre-order information you need!

Iris tasted of red wine—the red wine she must have drunk at dinner—and all the reasons he shouldn’t do this fled his mind. A vital chain broke in his psyche and everything he’d held back, everything he’d restrained with all his might, was suddenly set free. He surged into her mouth, desperate for the feel, for the taste of her, his wife, his duchess, his Iris. She was soft and sweet and warm and he wanted to devour her. To seize her and hold her and never let her go. The deep unfathomable well of his urges toward her frightened him, and he knew that if she became aware of them, they would frighten her as well.

But that was the thing—she wasn’t aware of them. She thought she was simply consummating their marriage or some such rot, God help them both.

She gripped his naked arms and the beast within him shuddered and stretched, claws scraping against the ground.

Dear God, he wanted this woman.

But he had to remember—to keep that human part of his mind awake and alive—that he mustn’t seed her.

Must never do as his cursed father had done.

He broke from her mouth, feeling the pulse of his cock against his breeches, and trailed his lips across her cheek to her ear. “Come with me, sweet girl.”

She blinked up at him, wide blue-gray eyes a little dazed.

He covered her mouth again before she could speak—either to consent or decline—and drew her slowly backward, step by step, toward the bed, until he hit it with the backs of his legs. He broke the kiss, looking down at her, her wet ruby lips parted, her cheeks flushed pink.

“Raphael,” she whispered, his name on her lips like a plea, and something within him broke.

This wasn’t what he wanted. This wasn’t right. But it was the only thing possible and it would have to suffice because it was all he could do.

And trying to resist was killing him.

He traced a hand up her arm, over her shoulder, to her neck, and from there touched her bound golden hair. “Will you take down your hair for me?”

He watched as she raised her arms, her stormy eyes locked on his, and withdrew the pins from her hair one by one until the heavy mass fell like a curtain around her shoulders. He bent then and gathered the locks in his hands, burying his face in her neck, inhaling her.

He felt her tremble against him and then her fingers speared through his hair. “Raphael.”

He lifted his head.

Her hands fell away and she began undressing, her head bent down as she unhooked her bodice. He saw that her fingers fumbled and he knew that a better man would turn aside. Would give her privacy to collect herself and disrobe with modesty.

But he wasn’t such a man. He wanted all of her—her mistakes and her private moments, her shame and her worries—everything she held back from the rest of the world. As he wanted this. This moment of fumbling.

This moment of intimacy.

She pulled the bodice from her arms. Untied her skirts and let them pool around her feet before kicking them aside. Glanced up at him and then worked at the laces to her stays.

Her unbound hair fell over her shoulders, nearly to her waist, thick and swaying gently as she moved.

She pulled her loosened stays off over her head and stood in chemise, stockings, and shoes. The tips of her breasts peeked out from beneath the thin cloth.

She began to bend for her shoes, but he stopped her. “No. Let me.”

He grasped her by the waist and lifted her to the bed.

Carefully he drew off her slippers, letting them drop to the hardwood floor before running his hand up her left calf. The room was so quiet he could hear each breath she drew. She watched him as he reached under her chemise, into that warm spot behind her knee, tugging at the ribbon of her garter.

He glanced up at her as he found bare skin. Hot, so hot under her skirt. He could almost imagine he smelled her, standing between her bent legs. He pulled the first stocking off and moved to her other foot, smoothing his thumb over her arch, over that high instep, that sweet, delicate ankle. The curve of her calf—one of the loveliest curves in nature—elegant and perfect. Someday he’d like to draw her nude.

The faint, almost inaudible whisper as he pulled the ribbon off raised the hairs on the back of his neck. His nostrils flared and he couldn’t wait any longer. He lifted her bodily, moving her farther up on the bed, placing her head and shoulders against the pillows, and then pushed up her chemise, crawling between her spread thighs and settling to enjoy what he’d found.

There. There she was, her pretty, pretty pink cunny, all coral lips and wispy dark-blond curls. He hiked her trembling legs over his arms, ignoring her gasp of shocked surprise. He glanced up once and saw wide, wondering eyes gazing back at him. Her gentlemanly first husband had evidently never done this to her. 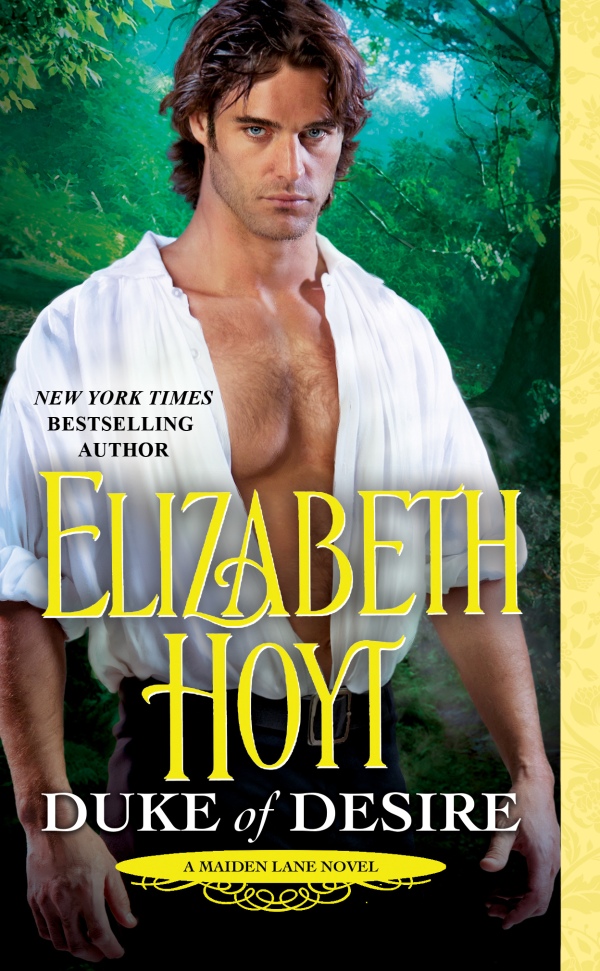 A LADY OF LIGHT
Refined, kind, and intelligent, Lady Iris Jordan finds herself the unlikely target of a diabolical kidnapping. Her captors are the notoriously evil Lords of Chaos. When one of the masked-and-nude!-Lords spirits her away to his carriage, she shoots him…only to find she may have been a trifle hasty.

A DUKE IN DEEPEST DARKNESS
Cynical, scarred, and brooding, Raphael de Chartres, the Duke of Dyemore, has made it his personal mission to infiltrate the Lords of Chaos and destroy them. Rescuing Lady Jordan was never in his plans. But now with the Lords out to kill them both, he has but one choice: marry the lady in order to keep her safe.

CAUGHT IN A WEB OF DANGER…AND DESIRE
Much to Raphael’s irritation, Iris insists on being the sort of duchess who involes herself in his life—and bed. Soon he’s drawn to both to her quick wit and her fiery passion. But when Iris discovers that Raphael’s past may be even more dangerous than the present, she falters. Is their love strong enough to withstand not only the Lords of Chaos but also Raphael’s own demons?

Elizabeth Hoyt is the New York Times bestselling author of over seventeen lush historical romances including the Maiden Lane series. Publishers Weekly has called her writing “mesmerizing.” She also pens deliciously fun contemporary romances under the name Julia Harper. Elizabeth lives in Minneapolis, Minnesota, with three untrained dogs, a garden in constant need of weeding, and the long-suffering Mr. Hoyt.