Wedding romance books can be awesome or horrible I’ve found. Fortunately, It Takes Two definitely falls into the fun and enjoyable side for me. This is the second book in Jenny Holiday’s Bridesmaids Behaving Badly series. I admit, I didn’t finish the first one. I just lost interest part way through. That is not the case for Wendy and Noah’s story however.

Wendy Liu is best friends with Jane Denning, the bride-to-be. She is both excited and apprehensive about Jane’s wedding because she knows things will never be the same between them as friends. There’s another reason for Wendy’s apprehension. All the wedding festivities means that Jane’s brother, Noah, will be back in town. Wendy hasn’t seen Noah since high school when he stood her up at the prom. She’s never forgiven him and does all she can to avoid him. Unfortunately, that just isn’t possible with the wedding gearing up.

Wendy and Noah are both lawyers. They both are runners. Noah is very attracted to Wendy but he also knows he doesn’t want to ruin their relationship, or what he perceives as their relationship. As the wedding proceeds, he grows closer to Wendy again but doesn’t understand the walls she is putting up. When a bet regarding the upcoming bachelor and bachelorette parties turns their simmering attraction into reality, Noah and Wendy both have to decide how they want to proceed.

There is something super powerful about this book that drew me in instantly. I really enjoyed the frenemy aspect of it that Wendy sees in her relationship with Noah. They banter and bicker and it starts off not quite sexual but yeah… it moves there in a really fun way. Wendy has been hurt a lot in the past. She hasn’t had an easy life and neither has Noah. That fact bonds them in ways that are unexpected and comforting.

I really liked Wendy. I love her adventurous personality. I appreciated her love for travel and new experiences. I really understood her devotion to her aunt, her remaining family, and wanted to hug her during some tumultuous moments of health for her aunt. I also really enjoyed the friendship between Wendy and Jane. It makes me want to sit down and read Jane’s story now with a fresh eye.

There is a static, crackly feeling throughout this entire book whenever Wendy and Noah are on the same page. It really draws you in and keeps you riveted on their romance. Falling in love was not easy for either of them but then, it became one of the easiest things they’ve ever done. This book left me with a happy sigh at the end.

(In fact, I enjoyed this book so much I don’t think this review adequately expresses that. But the tl;dr version is this book is worth your money and your reading time. It’s a friends to lovers story, of sorts, but also, SO MUCH more.)

It Takes Two is available now!

Under the Covers Book Blog

I am excited to be part of the big cover reveal for Sara Ney and Meghan Quinn’s upcoming book, Love Sincerely Yours, releasing October 9! (This book will not be in Kindle Unlimited.)

To whom it may concern,
Full disclosure; before we move forward with this email, I would like it to be known that I have consumed an adequate amount of alcoholic beverages to intoxicate myself tonight. Three margaritas, two shots, and one beer—because it was free.
I think it’s important to be open and honest with your co-workers, don’t you?
So here I am, being honest. Drunk but honest. Or just drunk with lust? You decide.
I like you so much it’s clouding my judgment and making me do things I never would sober. Like write this letter.
I have a hopeless, foolish, schoolgirl crush on you when you are the last person on earth I should be falling for. Did you know people around the office call you a sadist? An egomaniac. An insensitive, arrogant prick. Your bark is worse then your bite, and you don’t scare me. The fact is, I’d love that bite of yours to nip at my bare skin while we’re both wearing nothing but sheets.
For once I want you to look at me as more than one of your employees.
And as long as we’re being honest, that navy blue suit you wear? With the crisp white shirt? It really makes me want to loosen your tie and show you who’s boss.
Love,
Sincerely,
Yours.

Add it on Goodreads!

Sara Ney is the USA Today Bestselling Author of the How to Date a Douchebag series, and is best known for her sexy, laugh-out-loud New Adult romances. Among her favorite vices, she includes: iced latte’s, historical architecture and well-placed sarcasm. She lives colorfully, collects vintage books, art, loves flea markets, and fancies herself British.

She lives with her husband, children, and her ridiculously large dog.

Born in New York and raised in Southern California, Meghan has grown into a sassy, peanut butter eating, blonde haired swearing, animal hoarding lady. She is known to bust out and dance if “It’s Raining Men” starts beating through the air and heaven forbid you get a margarita in her, protect your legs because they may be humped.

Once she started commuting for an hour and twenty minutes every day to work for three years, she began to have conversations play in her head, real life, deep male voices and dainty lady coos kind of conversations. Perturbed and confused, she decided to either see a therapist about the hot and steamy voices running through her head or start writing them down. She decided to go with the cheaper option and started writing… enter her first novel, Caught Looking.

Now you can find the spicy, most definitely on the border of lunacy, kind of crazy lady residing in Colorado with the love of her life and her five, furry four legged children, hiking a trail or hiding behind shelves at grocery stores, wondering what kind of lube the nervous stranger will bring home to his wife. Oh and she loves a good boob squeeze!

Review: The Chase by Elle Kennedy 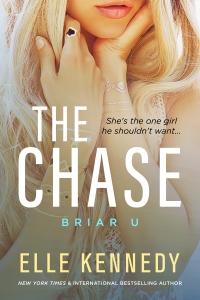 I feel like I’ve been waiting forever for Elle Kennedy’s The Chase. I know this is not true of course and I want and respect authors who take whatever time they need to write their books. But my oh my am I glad to finally have this on my kindle.

The Chase is the first book in Elle Kennedy’s spin-off from the Off-Campus series. This new series is Briar U. As far as I am aware, much like her other books, these books will be intereconnected but also standalone really nicely. Such is the case with The Chase which features Summer and Colin “Fitz” Fitzgerald, who were secondary characters in the original series. I am super glad Elle Kennedy choose to write about them.

Summer has recently transferred to Briar University. She had some trouble at her last school and well, now she’s kind of on her last legs at Briar. But she is determined to make it work. Unfortunately, she has a few things working against her. Her learning disorder, her attraction to Fitz, and the assistant dean who is her adviser and is also a total jerk. Oh yeah, and she has no place to live. Until that is, her older brother Dean (from The Score) calls in a favor and she is now the fourth roommate with three well-known and well-liked Briar U hockey players: Mike Hollis, Hunter Davenport, and Fitz. Talk about being in the belly of the (very attractive!) beast.

Fitz has been attracted to Summer for awhile but she seems like, well, a lot of work. He isn’t sure he is ready for someone that dynamic and dramatic in his life. When he is about to make his move on New Year’s Eve, he sees her hooking up with Hunter and well, that’s that. He’s disappointed but determined to move past his attraction.

Easier said than done, especially with Summer living in the house. She is front and center in his life in a major way and he can’t keep his eyes off of her. Unfortunately, Summer is getting fed-up with his definitive answer: does he want something with her or not? Fitz isn’t sure but if he doesn’t decide soon, he’s going to lose Summer. She is tired of being ignored or pushed aside by him after they share an intimate moment. She’s not ashamed of herself and won’t let him act this way. Will Fitz get it together?

I am so glad I got the chance to know Summer better in this book. I got a much better understanding of her as a woman. She is (much like Dean) more than meets the eye. I enjoyed celebrating her successes (her super fun independent study that involves fashion–you’ve got to read to know more!) and understanding and empathizing with her tough moments. I feel like Elle Kennedy captures the learning disability spectrum fairly well but as I don’t have a learning disability myself, I can’t say for sure how accurate Summer’s representation is, but I have a feeling it at least resembles someone’s experience out there. I also enjoyed watching her stand up for women (her new friend Brenna and just other female characters she got to know as the story continues). Like Summer, I was understandably frustrated with Fitz. While he didn’t think of it as a game, it kind of came off as one in the way he would reach out to her but then draw back again.

Fitz is an interesting and intense character. He has some scars from his parents’ divorce and constant fighting over him. He loves video games, he is artistic (in fact, one of my favorite scenes is when Fitz realizes Summer likes to draw too and he basically becomes the heart eyes emoji) and a good hockey player. I also like how he stands up for his friends and for Summer (eventually). I do wish he hadn’t dithered quite so much on his feelings for Summer. Like her, I was a bit frustrated because I wanted to see him take the leap.

There is much to enjoy in The Chase. I just thoroughly enjoy Elle Kennedy’s writing and characters and I think this book is one of her strongest yet. I am SUPER excited for the next book in the series, The Risk, which will feature Brenna and I think I have the hero figured out but I may be surprised.

And guess what, this week only, The Chase is only $2.99!! Readers, just go buy this book! It’s worth every penny.

The Chase is sexy, it’s got some really funny comedy touches, and it features a heroine I loved getting to know. Summer can kick-butt any day of the week!

Everyone says opposites attract. And they must be right, because there’s no logical reason why I’m so drawn to Colin Fitzgerald. I don’t usually go for tattoo-covered, video-gaming, hockey-playing nerd-jocks who think I’m flighty and superficial. His narrow view of me is the first strike against him.

It doesn’t help that he’s buddy-buddy with my brother. And that his best friend has a crush on me. And that I just moved in with them.

Oh, did I not mention we’re roommates?

I suppose it doesn’t matter. Fitzy has made it clear he’s not interested in me, even though the sparks between us are liable to burn our house down. I’m not the kind of girl who chases after a man, though, and I’m not about to start. I’ve got my hands full dealing with a new school, a sleazy professor, and an uncertain future. So if my sexy brooding roomie wises up and realizes what he’s missing?

He knows where to find me. 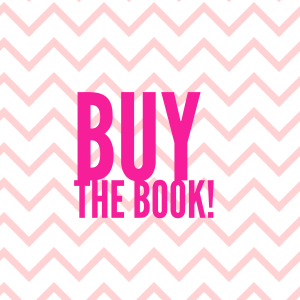