I am one of those people who loves everything to do with Christmas. Everything. I set up my tree by November 1 and I relish every Christmas movie, commercial, song, and moment to come in the next two months. Despite that, in general I’m not a Christmas romance reader. I’m not sure why, I just typically am not. But I am pleased to say that Monica Murphy’s Holidate really broke the mold for me. It is straight up pure holiday joy, the kind of thing I revel in.

Candice Gaines loves the holiday season. She is definitely filled with holiday cheer. She stays super busy during the run-up to Christmas so she can avoid thinking about the mother she lost to breast cancer when she was a young girl. Mostly, it works. But despite all the charity work she does during the holidays, she has never taken on a human as a project but that is exactly what Isabel Sullivan wants her to do. The Sullivans own the most well-known Christmas tree lots in the Monterey Bay area. Isabel is hoping that Candice will escort her oldest son, Charlie, around some holiday events and help him meet local business people. Charlie is a bit of a grump and has a tough time mingling, to put it mildly. Candice is all set to say no when she faints. She wakes up with a bump on her head and acquiescing to Isabel’s request, though she can’t quite remember what it is.

So, the book starts off on a false premise admittedly, but it is not made by the hero. In fact, Candice and Charlie don’t get on super well at first… until they definitely do. They both come to better understand and respect the hard work that they are putting in during the holiday season. And Charlie is realizing that maybe he has a little more room in his life than he thought. And maybe Candice would fit right in.

I really enjoyed this cheery holiday story! Much of it takes place on a Christmas tree farm, so the setting is already top-notch holiday perfection. But mostly I really enjoyed Charlie and Candice connecting. They are both lonely in their own way and being together, they find a nice way to connect without all the pressure their individual lives usually put on them.

This story goes to kisses only action wise but it still feels incredibly romantic. I had a blast seeing these two start to fall for each other. Monica Murphy leaves the story at the perfect ending place, a happy-for-now place, with the potential for something more in the future. This is the third book in this series but it stands alone really nicely. Even though I have read all the books in this series so far, readers will have no trouble connecting with Candice and Charlie.

Candice Gaines loves Christmas. Not only does she bask in the twinkling lights, sing Christmas carols and go crazy with the decorations, she’s also in the giving spirit, donating much of her time and wealth to various charities in the local area.

Charlie Sullivan despises Christmas. Though it keeps his family afloat, considering they own Sullivan Family Christmas Tree Farm, the main provider for Christmas trees on the Monterey peninsula. He’d much rather work among the trees versus have to deal with people.

But Charlie’s parents are taking on more philanthropic projects—and as their oldest child, they want him to be their official public representative. He just has to play nice and convince everyone he’s not a total holiday hater.

When Charlie’s mom asks Candice to accompany him to a variety of holiday parties and events, she reluctantly agrees. She thinks Charlie is a big ol’ Grinch, but is determined to change his mindset and help him spread Christmas cheer. Charlie finds Candice too chatty, too sweet, too much. Do people like her really exist?

Why yes, yes they do. The more time they spend together—along with a few kisses under the mistletoe—the more they start to like each other. Hopefully Charlie can convince Candice he doesn’t have a heart that’s two sizes too small before the ball drops on New Year’s Eve. 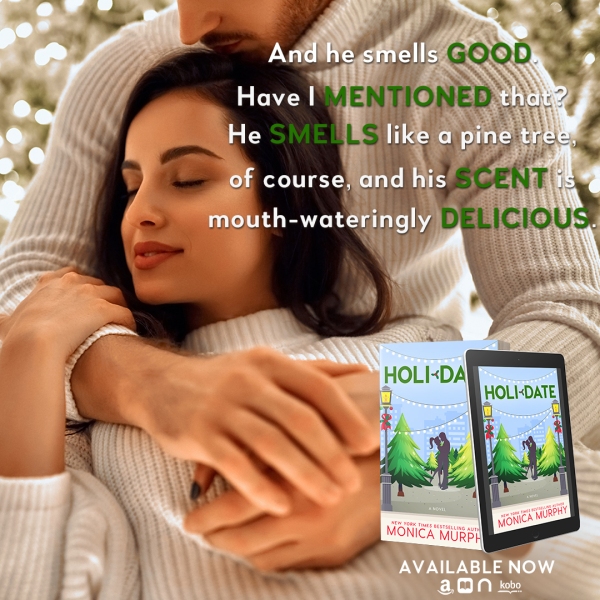 I go chasing after Charlie, thankful he hasn’t hopped back on that ATV and torn out of here. He’s headed straight for the giant red building, and I follow behind, having to pick up my step since one of his long strides equals about three of mine. He’s just so stinkin’ tall.

And he smells good. Have I mentioned that? He smells like a pine tree, of course, and his scent is mouth-wateringly delicious.

Ugh. I hate myself sometimes.

He pushes open the door of the building almost violently, sending it swinging wide, and I sneak in behind him, causing him to turn and practically snarl at me when he realizes I’m standing in front of him.

But I forget all about his snarl when I see how enchanting this room is. It’s not an office, but an actual store, filled to the brim with holiday decorations and knickknacks for sale. Candles are burning—I can smell cinnamon and spice wafting in the air. The scent of the real pine trees laden with ornaments standing in the room also lingers, and I breathe deep, closing my eyes for a moment so I can take it all in.

When I open my eyes, it’s to find Charlie standing there, his hands on his hips, his brow lowered. “Are you okay? That head injury still flaring up and giving you trouble?”

I roll my eyes. “No, you idiot. I’m enjoying the festive atmosphere.”

Oh, that was mean. I shouldn’t have said that.

But I don’t think he even noticed.

I slowly turn in a circle, pure delight flowing through my veins. I don’t know what to look at first, it’s all so beautiful. And there are layers upon layers of decorations. On the walls, cluttering shelves and tabletops, overflowing giant baskets. And of course there are the trees. They almost sag with their bounty of sparkling ornaments and twinkling lights. It would probably take me hours to explore it all, and I’m dying to start my exploration right at this very moment. “This store is so adorable!”

“My sister Victoria runs it.” He glances over at the counter where the register sits, but no one’s there. “I don’t know where she’s at, though. Maybe you could talk to her about—whatever it is you want to talk about.”

No way is he pushing this agenda onto his sister. Isabel wants Charlie to do this, and no one else.

“We’ve wasted the past five minutes with you huffing and puffing and refusing to speak to me.” I reach into my large bag and pull the folder out I wanted to show him. “Give me ten minutes. That’s all I need to talk about what we’re going to do over the next few weeks.”

He grimaces. Sighs. Tugs the cap off his head, all that gorgeous hair spilling across his forehead, and my fingers literally itch at the chance to push it out of his eyes.

But I restrain myself.

Monica Murphy is the New York Times, USA Today and #1 international bestselling author of the One Week Girlfriend series, the Billionaire Bachelors and The Rules series. Her books have been translated in almost a dozen languages and has sold over one million copies worldwide. She is both self-published and published by Random House/Bantam and HarperCollins/Avon. She writes new adult, young adult and contemporary romance.

She is a wife and a mother of three who lives in central California on fourteen acres in the middle of nowhere along with their one dog and too many cats. A self-confessed workaholic, when she’s not writing, she’s reading or hanging out with her husband and kids. She’s a firm believer in happy endings, though she will admit to putting her characters through angst-filled moments before they finally get that hard won HEA.